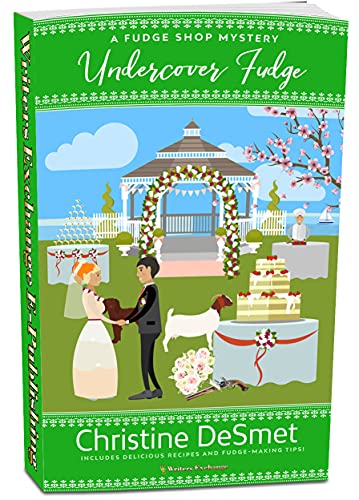 Candy shop owner Ava Oosterling has her hands full when her best friend Pauline Mertens takes a summer job as a wedding coordinator–with the nuptials and reception scheduled in mere days in the back yard of Ava’s Blue Heron Inn overlooking Lake Michigan’s bay.

To help out her best friend, Ava is intent on making the table favors–edible fudge lighthouses patterned after their county’s 11 lighthouses.

Unfortunately, trying to finish the luscious ruby chocolate lighthouses becomes elusive. The sheriff informs Ava that a band of thieves storming the country may have targeted this wedding. And that’s because there’s proof Pauline’s mother is associated with the thieves.

When the sheriff asks Ava to go undercover, she finds herself in an emotional quagmire. Pauline’s mother only recently returned to Fishers’ Harbor after years of estrangement from her daughter. And, Coletta Mertens now works as the housekeeper at Ava’s inn. Has Ava’s fudge-and-wine hospitality provided a hideout for a criminal?

Unfortunately, “until death do us part” takes a murderous twist involving Ava’s Grandpa Gil, the dog Lucky Harbor, and Ava’s own beau.